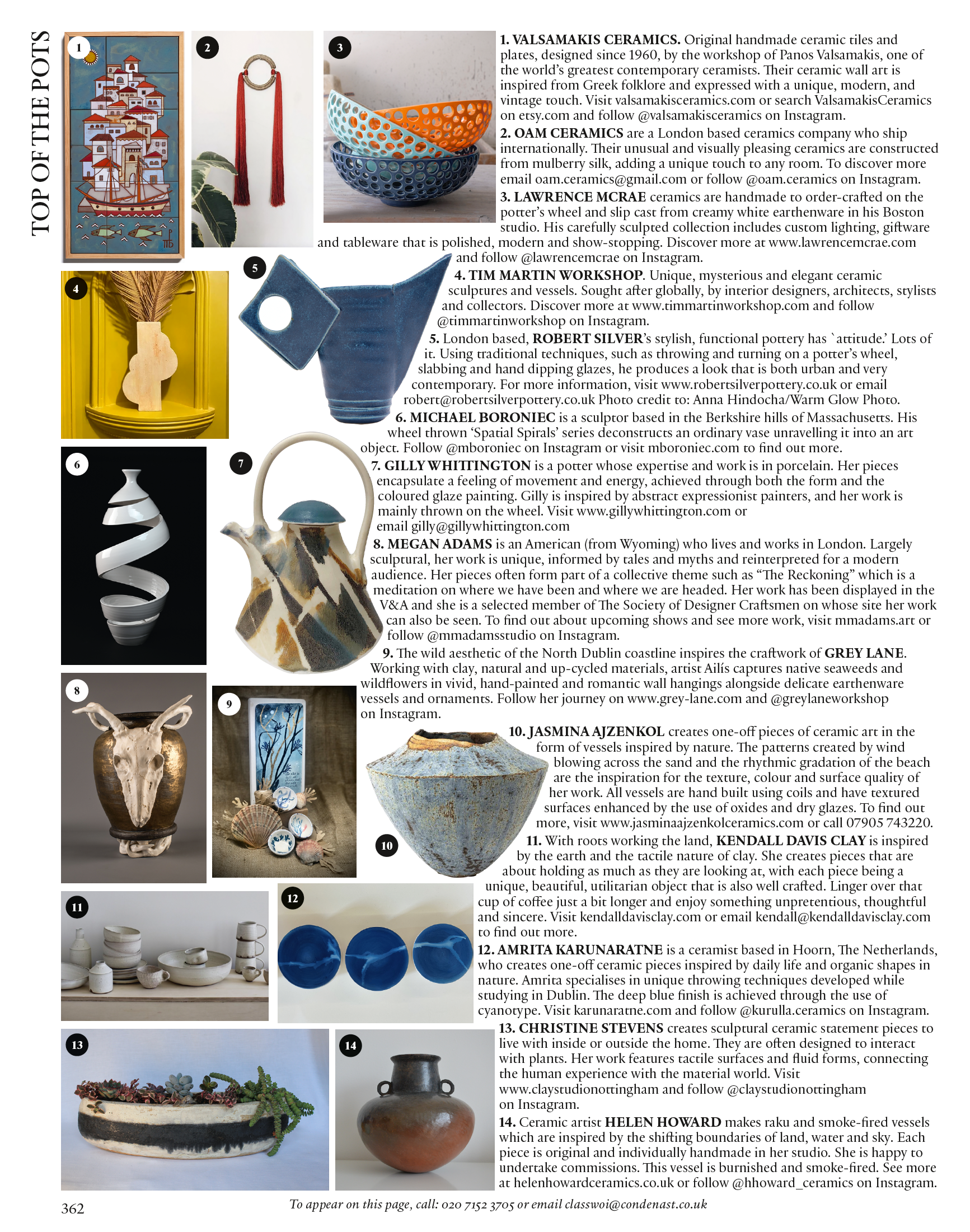 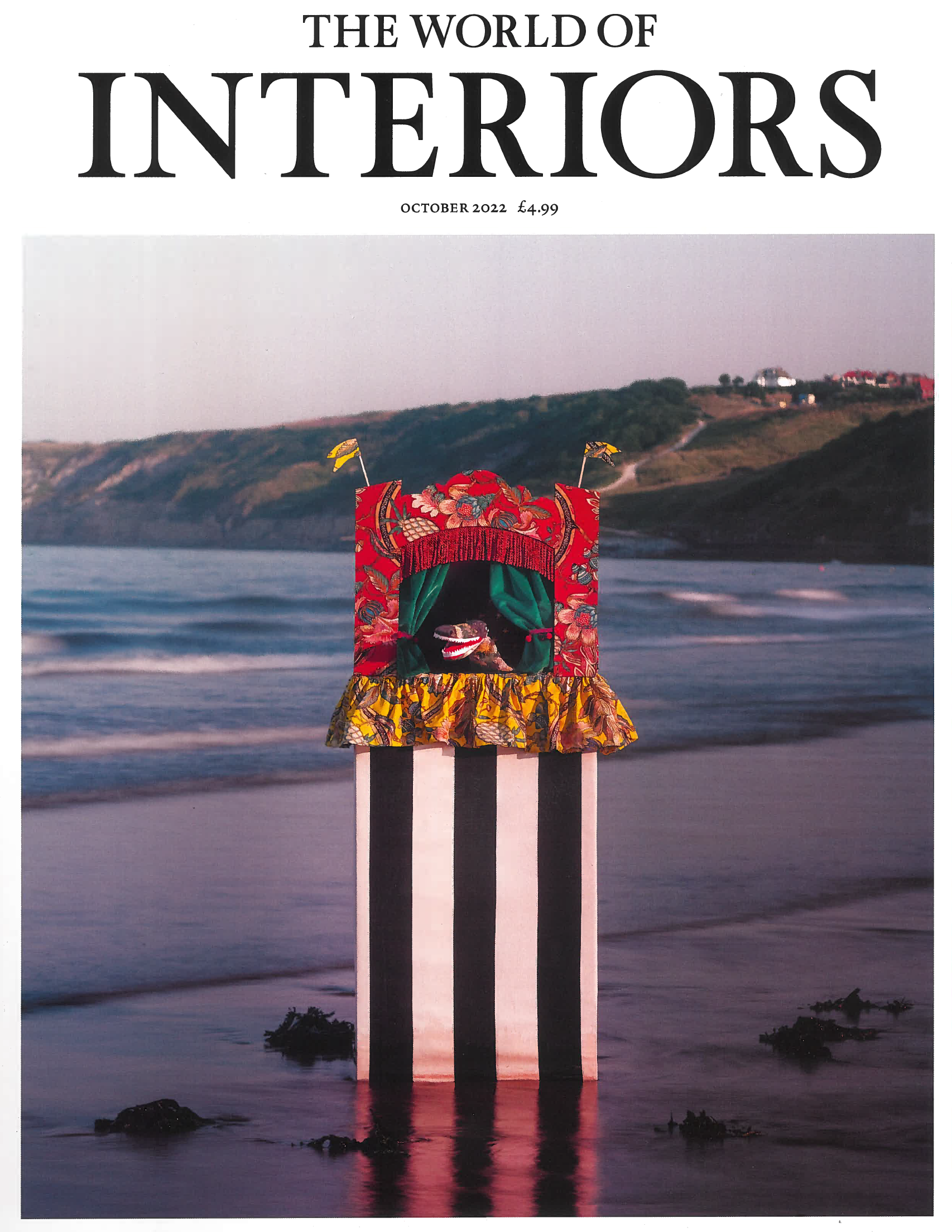 El Beit Magazine, based in Egypt, is one of the oldest magazines specializing in Design, Architecture, and Art in the Middle East

El Beit Magazine
“Art is not just an object or a concept;  It is a conversation between a being, an idea, a spectator and a creator, as if it were a universal language that we all speak.”
This is how the American artist and sculptor Michael Boroniec believes, where ceramic art for him means having a conversation with clay, a manual relationship between the artist and the medium that makes the piece more than just a beautiful thing, but an expression of the human spirit.
A sculptor and designer, his works are known for their unique spiral shapes, which have evolved into a series of vessels that vary in shape and degree of expansion.  His work focuses on ceramics as a dialogue between the historical and contemporary traces of clay as a material for fine art.  Although Michael's primary material is clay, he also had success in painting and printmaking.
Boroniec graduated from the Rhode Island School of Design, and his work has been shown in numerous museums and galleries across the United States in both group and solo exhibitions.
Art Market Hamptons | Aug 11-14, 2022
Bridgehampton Historical Society
Bridgehampton, New York

Click Image to Read the Full Article feature in Colossal

Michael Boroniec featured in the
New York Times
Lasting Beauty, Even in Shards

Michael Boroniec defies convention – and physics – with his altered ceramic vessels in a current solo exhibition.
The transformation of clay from a soft, malleable material into a hardened, seemingly indestructible form is one of the many elements that draw artists to the medium. From a weakened state out of the earth, artworks in clay go through an extended process of drying, its properties and capabilities evolving over time as the moisture content continues to diminish. The range of possibility with clay seems infinite, ranging from the simple traditional forms of pottery, to complex and conceptual sculptures. Finding himself somewhere in the middle is artist Michael Boroniec, who bridges the gap between pottery and sculpture, functional and not.

Without cutting into his work, Boroniec’s vases could be magnetically beautiful in their elegant simplicity and traditional fullness. However, the artist defies this tradition by altering the vessel, cutting a large gap into the work in a spiral from bottom to top. The resulting effect gives the pot a ribbon appearance and echoes its construction on the potter’s wheel. Even those with experienced knowledge of the ceramic process are left confused as to how Boroniec achieves his effect, considering the sagging and warping often experienced during even the lowest of firing temperatures.

Regardless, the works undoubtedly illustrate both Boroniec’s acute aesthetic as well as his extremely high level of technical expertise.
http://www.fineartconnoisseur.com/pages/21972878.php?
______________________________________________________________________
BERKSHIRE MUSEUM; Berkshire Now
Represents Michael Boroniec;
The BerkshireNow gallery space at the Berkshire Museum will feature a solo exhibition of complex ceramics by Michael Boroniec, September 4 through November 22, 2015. Berkshire Museum is part of Pittsfield’s monthly First Fridays Artswalk events, when admission to the BerkshireNow gallery will be free to the public, from 5 to 8 p.m., on September 4, October 2, and November 6. An opening reception for BerkshireNow: Michael Boroniec will be held on Friday, September 4, at 5 p.m., part of September’s First Fridays Artswalk.
Boroniec is known for creating distinct bodies of work and BerkshireNow: Michael Boroniec includes a number of the sculptor’s signature spiral vases as well as work from his series built on casts of human skulls.
By slicing the familiar vase form into a visually exciting coil, unwinding upwards in space, Boroniec’s spirals create a sense of energy not often seen in ceramic sculpture. “What began with teapots and a single spiral, has evolved into a series of vases that vary in form, degree of expansion, and number of coils,” says Boroniec. “Each vessel is wheel thrown then deconstructed. This process reveals aspects of the vase that most rarely encounter. Within the walls, maker’s marks become evident and contribute to the texture. The resultant ribbon effect, reminiscent of a wheel trimming, lends fragility, elegance, and motion to a medium generally perceived as hard and heavy. This emphasizes a resistance of gravity, allowing negative space to unravel and become part of the form. The result is a body of sculptural objects, resembling and born of functional vessels.”
The exhibition also includes a number of skulls. The human skull has been woven into art history for centuries; artists from the Flemish vanity painters of the 17th century to Andy Warhol and Jim Dine have interpreted the skull. “One cannot deny the depths of death and the soul while confronted with a skull,” says Boroniec. This series of skulls, in one vein, portrays pop icons, as the skull itself undeniably is a kitsch pop reference. The other vein exhibits the skull as a decorative object.
Both bodies of work illustrate Boroniec’s extremely high level of technical expertise in throwing and glazing and reflect his focus on ceramic as a dialog between the historical and contemporary implications of clay as a fine art material.
Though Boroniec’s primary material is clay, he has also found success in painting and print making. Boroniec received a BFA from Rhode Island School of Design in 2006 with a concentration in ceramic material.
BerkshireNow features four exhibits each year ranging from solo artists to group shows. Outfitting the nine-hundred-square-foot gallery space for the new exhibition series was made possible in part by a grant from the Pittsfield Cultural Council.